The following blog post from three years ago came across my way and was a much-needed message in my life right now. I am struggling with trusting God again, and while I know there's a deep-seated faith within me, it's a little hard to find. Why? Well, there are new things going on around here which require trusting God. My children are getting older and we're looking at colleges, my husband's health seems stable and I need to move forward in this new normal, my own habits of stress eating and "doing" instead of healthy eating and "being" are creeping back. But I know in my head, and somewhere in my heart, that God is in charge. I can jump again into His presence, and while it feels like free falling, it can be a place of peace. I can still remember those five seconds of falling...they were freeing. Let me know: is this message just for me or also for some others out there? I'd love to hear about it.
___________________________________________________________

Back in the early eighties, there was a parachuting fad, and I dove in. Or shall I say: I dove out…of the plane. The end of the story? I landed on the ground with more of a thud than anticipated, but safely nonetheless. The jump itself was triggered with the single command: “Go!”

The one-day-crash-training-course had a single purpose: to help us know what to do when all other systems failed. We each were provided two parachutes. One of the parachutes was strapped to our backs, and was subsequently attached to the plane with a static line. The line released the chute as we left the plane. The most critical piece of equipment was the second parachute, referred to as our “reserve” chutes. These were strapped to the front of our abdomen. This chute was to be deployed if the first chute failed. We were repeatedly taught “Pull, then throw!” “Pull, then throw!” “Pull, then throw!” We were taught to pull that reserve chute out of the pack if necessary, and then throw it away from ourselves as hard as we could so we would not get caught up in the ropes as it opened.

The plane ride was next. Packed in like sardines, straddling the bench, we were to exit the plane one at a time. The first person went. All I saw was the blur of her helmet, so I figured she went down, hoping the parachute opened to accompany her. I still remember my racing heart; beads of sweat on my forehead; a lack of ability to swallow. The open door of the airplane seemed to grow larger with each moment. Gulp. My turn. I stood up. “Ready?” the instructor said. A brief nod. With a slap of his palm against my left shoulder, it was “Go” time. I jumped out and dove into nothingness.

Free falling was incredible. Those five thrilling seconds of weightlessness were worth the work. A strong tug, then I was pulled upward, and thankfully I knew my chute was up. I didn’t need to use the reserve chute. I don’t know if I would’ve remembered “Pull, then throw” at that point either. I continued to float down to the ground. It was an unusual feeling, but also peaceful.

I was thinking about that moment of “Go” time recently. The times before and after the actual jump were fantastic, but “Go” time was that pivot-point where I could have said “No!” Why was it so frightening to jump after all that training? Because I still felt unsure of what would happen. Because, at “Go” time, I felt out of control—the most. This is my new definition of faith—saying “Go” when everything in me wants to say “No!.” Trusting God requires that I trust Him with everything, the training time, the equipment, and even the “Go” time.

The only reason I can say “yes” at “Go” time in my faith is because of what I know about God. I know He loves me and always gives me a safe place to land. No adventure can beat that type of fall. Falling into faith is an exciting, but peaceful, adventure.

Posted by Lisa Tomarelli at 8:48 AM 3 comments: 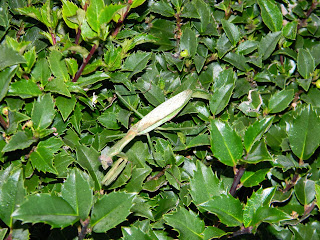 I’ve seen a few praying mantis recently, and am always shocked to notice the rather large bug camouflaged on the holly bush in front of our house. It’s their large size which intrigues me, but then when I look more closely, I’m fascinated by those front legs giving them their name. They remind me to be in that position of prayer more often for myself.

Reading up a little on the fascinating creatures, I learned that the praying mantis’ front legs are in the folded position to give them a chance to snag their prey quickly. More gruesome is the fact that those legs are equipped with spikes to help grab their prey and pin it in place. Nice bug, huh? Sitting in a praying position in order to get some food. Sounds like a good approach to prayer. Sitting and waiting patiently, maybe then I can snag some food for my soul. A sense of peace. Pinned. A reminder of God’s power. Pinned. A feeling of God’s love. Pinned.

I have been a little down recently, mostly because I’m in another stage of “letting go” as a mom because my son is discussing his future, including college options. I’m excited for him, big-time, but my heart will miss having him around. The discouragement drove me to pray a little more patiently these last few weeks. I’m back to being a little more still. Sometimes I’m crying, sometimes I’m peaceful, but in being still I’m getting back into the groove of sensing God’s presence.

The other day I found a note, written in my own handwriting, tucked away in the pocket of my Kindle cover. It was a verse I used as a reminder against discouragement. Joshua 1:9 “Have I not commanded you? Be strong and courageous. Do not be terrified; do not be discouraged, for the Lord your God will be with you wherever you go.” Further back in the same pocket, I found a second note written to me in my daughter’s handwriting from a year ago. At the bottom of her note, was written a Bible verse. The same one.

Like the praying mantis, I’m going to pin that message and eat it up.